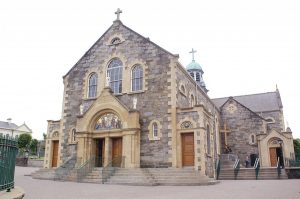 The present Long Tower Church began life, though on a much smaller scale in 1783. It was the inspiration of Father John Lynch, a native of Balteagh, Dungiven, and theological graduate of the Sorbonne in Paris, who was the Parish Priest of Derry at that time. He lived in a house off Ferguson’s Lane, the site of which is preserved today as a rest area.

The Bishop of Derry at that time was Dr Phillip McDevitt (1766-1797), also a graduate of the Sorbonne, but he did not live in the city until well into his episcopate. He was a native of Fahan, and as Bishop he originally took up residence in Moville and Clady in County Tyrone where he carried on for a time a small seminary for students to the Priesthood.

Fr Lynch had, up to this time, said Mass either in his house in Ferguson’s Lane, or when weather permitted, near the Hawthorn tree which marked the traditional site of the Teampall Mor, the great Cathedral of Derry. Fr Lynch considered times were favourable to the building of a Church in the city and in 1783 he set about raising funds, including 200 Guineas from the Protestant Bishop of Derry.

Building commenced in 1784. The design of the church was a straight forward rectangle, comprising one of the transepts of the present church with the altar near the present side door facing Bishop Street. It had an earthen floor and was estimated to hold 2000 persons standing. It was still unfinished when Father Lynch died on December 20th, 1786, but as a mark of honour it was opened for his funeral, the preacher addressing his congregation from a pile of stones left in a corner by workmen. At his own request Father Lynch was buried beneath the Hawthorn Tree where he had so often said Mass in harsher times, and he is remembered on a tablet which bears this inscription:

“Here grew the Hawthorn Tree under whose shade during every lull of the persecutions, Mass was frequently offered from 1585 – 1784. The last Penal Mass was celebrated here in 1784 by Father John Lynch, who partly rebuilt the Long Tower and who lies buried beneath. He died, December 20th 1786. RIP.”

Father Lynch was succeeded by Rev Charles O’Donnell, a nephew of Bishop McDevitt and Dean of the Diocese. Doctor O’Donnell was later made Bishop in 1797, and continued residing in Ferguson’s Lane where he acquired the adjoining houses and opened a small seminary for students of the priesthood. In 1810 he began the enlargement of the Long Tower Church, by adding a nave and galleries, and changed the altar to the northern side of the Church. The general pattern and outline of the altar has remained unchanged to the present day. Originally, the four large columns supporting the canopy over the altar were made of timber, but the Corinthian capitals of Italian marble which rest on them are the originals, acquired from the Protestant Bishop, Lord Bristol, when his plans for building a house at Ballyscullion were abandoned.

Once again the Protestant community contributed generously towards the cost of the work. The Bishop of Derry, Dr Knox, contributed 50 Guineas, the Corporation gave a similar amount, and the Protestant Dean, Dr Hume, gave 10 Guineas. A subscription list opened among Protestant people raised £321.00, and a similar list among Catholics raised £812.00.

Over the years many additions and improvements were made to the church. The building itself contains an abundance of historical artifacts; stained glass windows, the Hannigan Monstrance, the organ in the Central Gallery, the Communion rail constructed from Carrara marble and the opus sectile pictures around the church all come together to add to the historical look and feel of this magnificent building.

The Dubh Regles – the Black Church was the monastic Church of St Columba in Derry, and it survived well down the centuries, although was probably rebuilt several times.

It was used by the early English settlers for their worship before St Columb’s Cathedral was built, though how long it survived afterwards is unknown.

The Teampall Mor which gives its name to the present city parish, was built in 1164, close to the site of the current Long Tower Church, but it had fallen into ruins by the later part of the 15th Century.

It was used by the colonists to store gunpowder, and 1568 a massive explosion destroyed what was left of the church. The stones were used to furnish building material for the city walls in 1609. There were still traces of the outline of the church in 1689 when Neville drew his map of the City, but even these disappeared the following year when the City walls were strengthened to withstand the siege. 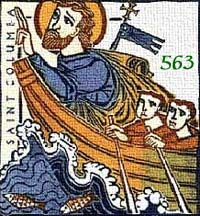 Although the first written reference to Doire Colmcille does not occur until the 12th century, there are a number of references in Adamnan’s Life of Columb written a century after the Saint’s death, linking Doire Calgach – as Derry was then called – with the monks of St Columb. Despite this absence of a direct link there is a lasting coviction that Columba was the founder of Derrry, and that, while the Long Tower Church may or may not be situated on the siet of the ancient Dubh Regles, or the Teampall Mor, its is sufficiently close to be a lasting memorial to his life and work.

The most familiar account of his life places the birth of Columba at Gartan in County Donegal on Thursday the 7th of December in the year 521. His father was Phelim McFergus, a great grandson of Niall of the Nine Hostages, and his mother was called Eithne, from a noble family of Leinster. He was educated at Kilmacrennan and later at the Monastic School of Moville near the head of Strangford Lough. From there he passed on to Clonard where his studies were directed by one of the major figures of the early Irish church, St Finnian.

Columba was ordained priest by Etchen, the Bishop of Clonfad, and after a short stay in the monastery of Glasnevin he returned north and in 546 he founded his first monastery in Doire Calgach (Derry). The church which he built there came to be known as the Dubh Regles, the black church, and was long believed to have stood somewhere in the precincts of the present Long Tower Church, but modern scholarship would tend to place it further up the hill in the vicinity of St Augustine’s Church within the walls.

From Derry, Columba travelled all over Ireland and founded, or was instrumental in founding, monasteries at Durrow, Kells, Swords, Glen Colmcille, and Tory Island. Then in 563, Columba and 12 companions left Ireland and settled on the Island of Iona, near Mull in the Hebrides, an outpost of the early Irish settlement of Dalriada in Scotland. The reason for his departure is uncertain, but the most popular explanation, and the most likely, is a combination of incidents that led to the Battle of Cuildremhne in 561.

First Columba had copied a book of the Gospels belonging to St Finian and King Dermot had ordered him to hand the copy back. Then, Dermot had execute a young prince of Connaught who had sought refuge with Columba after a fatal fight. Columba had taken offence and had rallied his own people, and with the help of the Connaught men, he routed King Dermot at the Battle of Cuildremhne, but the numerous deaths lost him the good will of many of his supporters, and after wandering around the country for two years he assembled his companions and left for Iona.

On Iona he founded another monastery, and he spent the remainder of his days there, apart from two short visits to Ireland in 575 and 585, dividing his time between missionary work amoung the neighbouring Picts and study among the manuscripts of his Sriptorium. He died on 0 June 597, and was buried in Iona, but precisely where, no one knows.

Father Gerard Mongan   Fr Gerard is a native of Omagh. He was ordained in Rome in 2003. He has served in the Parishes of Steelstown, St Eugene’s, Dungiven & Three Patrons and was previously a Curate in Long Tower from 2007-2009. Fr Gerard was appointed as Administrator, to the Long Tower in September 2022.